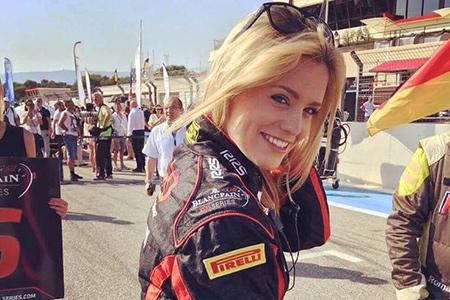 Jane is one of the Blancpain GT Series Top trackside reporters

The SEF Ambassadors are a fundamental cog in the Sean Edwards foundation machine. Promoting SEF’s passion for safety, using their voice has been instrumental in accelerating the speed at which SEF is able to share the important message to consider safety before getting behind a vehicle or entering onto the race track.

With over 3 years serving as a SEF Ambassador, Dakota Jane is one of the longest standing advocates of the Sean Edwards Foundation.

With an active role working as one of Blancpain’s top trackside reporters, and an avid journalist, she really brings some gravitas to the SEF foundation. She has a reputation for delivering great content to the GT Racing fans and with over half a million people watching every weekend she is certainly one to look out for.

Dakota Jane exudes charisma and engages with a fresh and charming approach, making the GT Blancpain Racing series more entertaining and exciting for the whole family.

Where it all started for Dakota Jane

Dakota Jane is the Daughter of a pilot,  who supported her passion to ride motorbikes and buggies at the tender age of three. Often taking her to racing events for family days out. She was raised in Monaco and named after the famous Douglas dc3 named the “Dakota”. This amazing aircraft served in WWII.

Dakota Jane is also a Graduate of Florida State University in International Affairs and Hospitality. She has always had a real passion for racing driving and even competed in the Solar Toyota Car challenge in 2009 as the only female contender ‘daring to be different’. Showing her true talent, she also built and successfully raced a solar-powered car at Duxford Aerodrome.

Ever since she was a little girl she had dreamed of owning her own Muscle car. Through her hard work, she now drives a Ford GT Mustang and swears she would never part with it!

Her sense of adventure and wanting to see the world has ensured she hasn't settled for any old office job, but instead she is getting her hands dirty every weekend mixing in with the drivers and hurtling down the PIT lanes with her crew struggling to keep up.

Dakota Jane´s passion for motorsport creates a strong connection with the spectators week in week out. Her parents always told her to go for it and she really did when she applied for the job (which didn't exist) as a presenter for the Stephane Ratel Organisation.

Using her tenacity and smart thinking, one day she decided to pitch herself to the television production manager of the SRO at the time. Creating an interview of herself and sending it to him off the cuff in hopes she might get a response. To her surprise, she was told ‘come for a race to see what it would be like’. Which she did. Dakota attended her first Blancpain GT race at Brands Hatch in 2016 and she never looked back.

She has also presented on media days with  MSVR Championships, along with commentary for Japanese Super GT on Nismo TV with Sam Collins.

SRO Motorsport Group's series Blancpain GT is one of the highest levels of GT racing in the world and takes her to some of the most prestigious racing circuits in Europe.

With a bright career ahead, Dakota Jane has her sights firmly set on the future. Her ambition will surely drive her to the top and help her achieve her dream of working in motorsport for years to come. You can visit her website to learn more.

Click here to learn more about the SEF Ambassadors and the Sean Edwards Foundation. We have many initiatives related to safety on and off the track. If you can help support our organisation by making a small donation it would be greatly received. As always, #safetyfirst !!